Maslow’s Hierachy of needs and yoga

In the following pages I am going to discuss an example of how yoga can be blended with psychology in understanding human beings and aiding better quality of life without any psychological ailments. 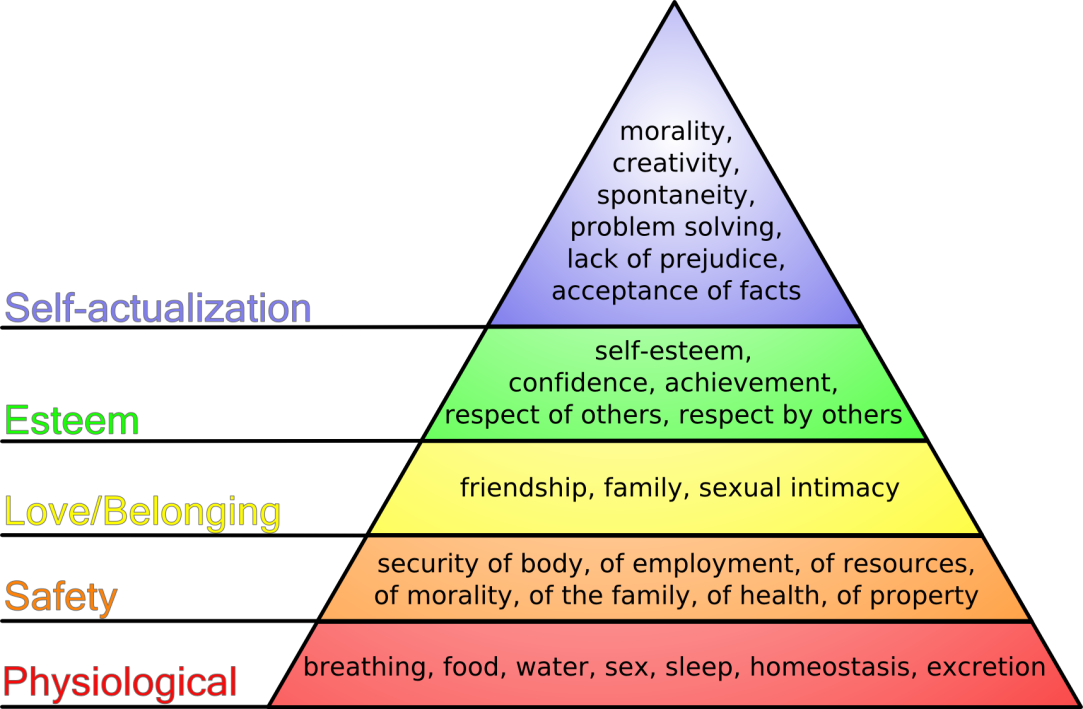 From the illustration one can see that the simple physical needs take up our attention. As we achieve this we move up the pyramid to the next level of needs.  In the attempt to achieve better and better things in live or the higher order of needs, the human builds up stress. Despite striving to accomplish the goals of life if the person is denied the specific need, it results in high mental, physical and emotional stress. My first contention is that of people dicover yoga at the earlier stages of their quest  by their earlier twenties then their quest will be more calmer, focused and successful.   My second contention is that if one looks closely at the highest level of needs , it is very similar to the state of mind that can be obtained by prolonged practice of yoga. At this level one does not desire worldly belongings but the pleasure of doing the work simply because it give the person great fulfilment.  At this stage there is more creativity, less prejudice and a calm acceptance of facts. In a way t eh famous artists like Michelangelo or Leonardo da Vinci or Shakes had achieve these states of mind. But these are great people blessed with extraordinary talent. What about the average person? How can he or she achieve this state of mind? The answer is yoga. It costs nothing and gives you everything.

If we look at the discussions so far one can see a definite impact of yoga in the psychology of a person. The two fields are interconnected and both strive to grant the human being a better mental state.  Yoga helps the individual to

Today there is a lot of research going on all over the world on the impact of yoga on mental illnesses like schizophrenia, neuroticism, Obsessive compulsive disorders and autism.  Yoga has been introduced into the curriculum of schools and colleges. This way students will have access to the benefits of the practice early in life. Yoga has played a large role in shaping the culture of India. However, one should not confuse yoga with religion. Yoga gives an individual spirituality that is self-realizations. It should not be used to propagate certain religions. That is not what yoga teaches. That is not what Swami Ramakrishna or Vivekananda propagate.

In conclusion, Yoga can be used to prevent the development of Psychological disorders in the complex world of today where even school children experience high levels of stress in the competitive nature of today’s education. The nurturing element  has almost disappeared from today’s education.

“Yoga may serve a preventive role in adolescent mental health,” according to the new study, led by Jessica Noggle, PhD, of Brigham and Women’s Hospital, Harvard Medical School, Boston.

“Pilot Study Shows Improvements in Some Psychosocial Outcomes Fifty-one 11th- and 12th-grade students registered for physical education (PE) at a Massachusetts high school were randomly assigned to yoga or regular PE classes. (Two-thirds were assigned to yoga.) Based on Kripalu yoga, the classes consisted of physical yoga postures together with breathing exercises, relaxation, and meditation. Students in the comparison group received regular PE classes.

Students completed a battery of psychosocial tests before and after the ten-week yoga program. In addition to tests of mood and tension/anxiety, both groups completed tests assessing the development of self-regulatory skills — such as resilience, control of anger expression, and mindfulness — thought to protect against the development of mental health problems.” –Science Daily

Consultation services for Behavioural Development of Employees Organization Development consultant, Cross cultural Trainer, Personal Safety Program Facilitator MA in Applied Psychology, PhD (Organization Behavior), SHRM certificate in HR ( USA), Certified trainer for MBTI, IDI, Social Styles ( USA), Certifications in Life skills Facilitation, Yoga (S Vyasa University), Cognitive Behavior Therapy and Dialectical Behavior therapy I have worked in the HR and Organization Development space for nearly 22 years during which time I have worked at improving organizational and people through Leadership coaching, Cross cultural training, Diversity management, and training in Assertiveness, mentoring, goal setting In India, I had tenures with organizations like Indian Market Research Bureau, Kirloskar AAF, The P and P group and PwC SDC with primary focus being on Organization development and resultant training/coaching. The later part of my career has been in the United States with organization such as Minnesota School of business and Metropolitan council. From 2013-2016 I worked as a trainer with Brookfield International for Cross Cultural competence durin which time I coached senior executives from global companies such as Bosch, Northern trust and Merck on Indian culture. I have conducted training programs for managers on American culture (General motors, Bosch). And published a book on the subject titled “American Culture – Demystified for new Indian Immigrants.” In the last couple of years I have been associated with Enfold Charitable trust in Bangalore India helping them with effectiveness research and streamlining the Volunteer involvement program. I conduct yoga classes on stress management. View all posts by Dr. Prabha Srinivas